SSSW is held in the University Residential Center located in the small medieval hilltop town of Bertinoro. This town is in Emilia Romagna about 50km east of Bologna at an elevation of 230m above sea level.  Bertinoro is easily reached by train and taxi from Bologna and is close to many splendid Italian locations such as Ravenna, Rimini on the Adriatic coast, and the Republic of San Marino (all within 35km) as well as some less well-known locations like the thermal springs of Fratta Terme, the Pieve di San Donato in Polenta and the castle and monastic gardens of Monte Maggio.  Bertinoro can also be a base for visiting some of the better-known Italian locations such as Padua, Ferrara, Vicenza, Venice, Florence and Siena.

Bertinoro itself is picturesque, with many narrow streets and walkways winding around the central peak.  Meetings are held in an archiepiscopal castle that has been converted by the University of Bologna into a modern conference center with computing facilities and Internet access.  From the castle you can enjoy a beautiful vista that stretches from the Tuscan Apennines to the Adriatic coast and the Alps over the Po Valley. 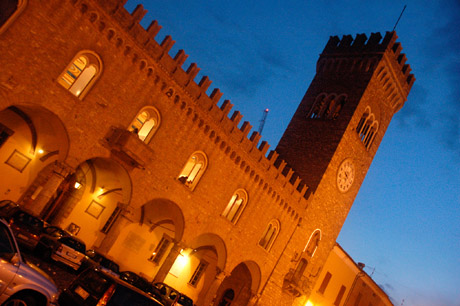 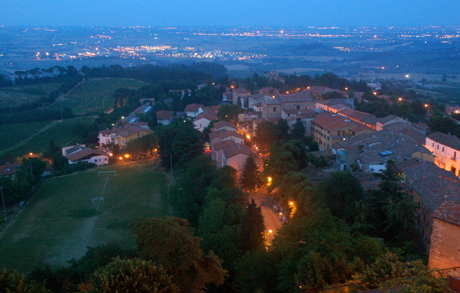 Bertinoro lies approximately half-way between Bologna and the Adriatic coast town of Rimini. Here is a Google Earth place mark to locate the BiCi complex in Bertinoro. If you are arriving by car, you can obtain driving instructions from most starting points using Google Maps.

There’s a shuttle service every 11 minutes, the transfer takes around 20 minutes.
Tickets can be purchased directly online, from the automatic vending machines located in the airport, and in Bologna Centrale Railway Station (at the Aerobus departure point) or at the TPER ticket offices.

The transfer takes ~15 minutes and the cost is ~20 euros.
From Bologna Centrale Railway station you can reach the school by train. You can choose between two target stations: Forlimpopoli/Bertinoro and Forlì.

If you arrive at Bologna Centrale Railway station at a time close to a train directed to Forlimpopoli/Bertinoro, we recommend to take that solution as the transfer is shorter.

Some of the scheduled trains are as follows:

You can buy tickets online.
Notice that there are other possible solutions, they are ok but they include a connection, so be careful.

There are very frequent trains. You can see the available solutions and buy tickets online.